OK so this is not the most recent title, but I only became aware of it when Joachim Schmid showed the book at the photobook publishing seminar we held at the gallery last weekend. Its in part a homage to Ed Ruscha..
Its titled:
Twentysix Gasoline Stations, Every Building on the Sunset Strip, Thirtyfour Parking Lots, Nine Swimming Pools, A Few Palm Trees, No Small Fires

Being a big fan of the books of both Ed Ruscha and Joachim, it was good to see.... 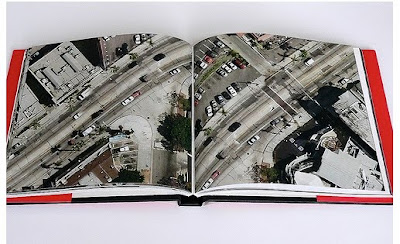 And here is what Joachim has to say about it:
Between 1963 and 1972, Edward Ruscha published fifteen artist's books, his first being "Twentysix Gasoline Stations"; a book which is considered to be the first modern artist's book, and has become the iconic precursor and a major influence on the emerging international artists' books culture.
"Twentysix Gasoline Stations, Every Building on the Sunset Strip, Thirtyfour Parking Lots, Nine Swimming Pools, A Few Palm Trees, No Small Fires" is a modern remake of some of Ruscha's famous books, all grouped in one volume. Unlike the original books it relates to, this work was made entirely at my Berlin studio. I didn't visit Los Angeles to make the book and I didn't use a camera either. The camera is out there. 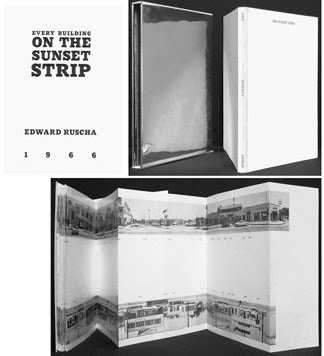 The picture above is of one of Rucsha's originals, and will set you back quite a bit, but thankfully as with many of Joachim's books its available through Blurb on demand here...
Posted by HOST Gallery Blog at 07:31